For example:
 My father gave me this book
 I played with these children
 I saw that man
 I went with those boys.

Relative adjectives introduce relative clauses and are placed very close to the noun they qualify.
For example:
• Which route are you going?
• I gave him what money I could spare.

Recommended: How To Check NIN And Link National Identity Number To more than 1 Sim

Interrogative adjective as the name implies asks a question. Because these interrogatives are adjectives, they must precede the noun they modify.
For example:
• Which suit shall I wear?
• What food did he eat?

This is an adjective used to refer to each and every person or thing separately. The distributive adjective refers to each person or thing. For example Each, Either, Neither, Any, None and both.
For example:
 Each student passed the examination.
 Every man should love his wife.
 Neither party has registered for the election.

This is an adjective used to emphasize a noun. Example: own, very.
For example:
 I saw it with my own eyes.
 That was the very book I was reading.

The word ‘what’ is known as an exclamatory adjective.
For example :
 What a beauty!
 What an insult!
 What a tragedy!

Proper adjective involves using the name of a people to describe another noun. It also an adjective derived from a proper noun.
Examples:
 Chinese restaurants are expensive.
 Nigerian food is delicious.
 Italian shoes are durable.

Adjective of quality answers the question of what kind.
For example:
 He is a brave person. (What kind of person? Brave)

These are the adjectives which are used to state how many things or in what order they come. For example many, much, a few, several, enough, all, cardinal and ordinal numbers.

For example:
 I have many books in my bag.
 He did not drink much water.

Adjectives of number include all the numerals both cardinal and ordinals.
For example:
 I visited your house four times. (ordinal numbers are first, second and third.
 The third boy is my son. (four is a cardinal adjective while third is an ordinal.
Also included in this category are some words that can do the job of pronouns.
For example:
 Some biscuits are here(adjective)
 Some are here(pronoun)
 Both students were idle(adjective)
 Both were idle (pronoun)

The positive indicates the word. The word or an adjective used to talk about the quality of a person, place or thing is known as a positive degree. ( I call it the adjective itself) examples are: good, fat, heavy, clever, brave, beautiful, handsome, healthy, wealthy, poor and rich.
For example:
 He is an intelligent boy.
 She is a tall girl.

Please note that when an adjective ends in “y” we use inflexions rather than “more” and “most”. E.g Chiamaka is happier than Ngozi, instead of Chiamaka is happier than Ngozi.
Please note also that when we want to make a comparison between two things which are equal in some way, we use “as”, e.g this house is as big as that one.
Further take notice that you should not use “more”, “most”, “less” or “least” before adjectives that already end with “er” or “est” 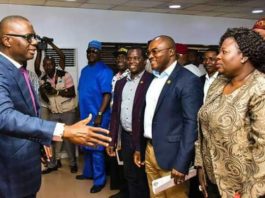